Sometimes, you just want to cook a meal without any stress. For a smooth, easy cooking experience, combination ovens such as the Breville smart oven are the way to go.

Most people associate cooking with traditional — not to mention large — ovens. Yet it doesn’t have to be that way. Increasingly, convection ovens are pushing the boundaries of cooking. Many perform the same functions as a typical oven, but they take up less space and carry a lower price tag.

What Is the Breville Smart Oven?

The Breville smart oven is a combination oven that can cook, toast, and roast all your favorite food.

Although the models are all the same compact size, there are additional features available in the more expensive models. 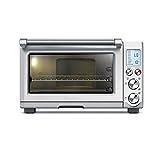 They say that good things come in small packages. The Breville smart oven is no exception, coming in at around 18.5 inches wide and 12.5 inches tall on the outside. It’s not hard to find space for Breville brand. Any oven worth its salt should give the user some degree of control over how their food cooks. The Breville Smart Oven Pro, as an example, offers many different modes to cook or bake how you like. 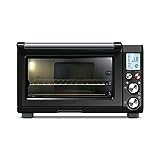 There are three separate dials in the control function. They regulate the oven’s various functions and preset options, as well as dials that allow you to set the oven’s temperature and cooking time.

It also couldn’t be easier to cook, with four simple cooking buttons. Together, the buttons control the start and end of the cooking and everything in between. For instance, you can tell the oven that you’re cooking food from frozen, you can set temperatures to Fahrenheit or Celsius, and you can turn the oven into a convection oven if you wish.

All these simple options, and the intuitive control over them that the Breville offers, mean that evenly-cooked food has never been easier to achieve. No one wants to buy a dangerous appliance, and consideration should always be given to how safe an appliance is in your home. If you have small children, then you’ll want to be especially careful that any combination oven you have won’t pose a risk to them.

The Breville smart oven has a magnetic catch on its door, which partially pulls out the cooking rack on its own accord. This safety feature means you won’t have to put your hand in a hot oven to pull out your food. Additionally, there are mechanisms in place that prevent the oven rack from falling out of the oven.

Although a level of common sense will still be needed when using the oven, given the high temperatures inevitably involved, the Breville smart oven  does assure peace of mind, as safety is a design feature. As there are quite a few models within the Breville smart oven range, understandably there’s no single price.

Although the Breville smart oven is at the upper range of combination ovens in the market, it offers a lot of features for its price.

How Does the Breville Smart Oven Compare to Other Major Brands?

The Breville smart oven is not a new player in the compact oven market. As such, there is plenty of competition to consider. Notable mentions include Cuisinart Chef’s Convection Toaster Oven TOB-260N, and Kenmore Elite Digital Countertop Convection Oven 76771. 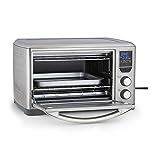 Although Breville smart oven has seen mainly positive reviews since its release, it’s always worth knowing whether its models can suit your needs, and what the competition has to offer.

With that in mind, we examined some of the key differentiators between the competitors, including safety, performance and price. As noted above, Breville smart oven does offer some safety features, including a magnetic catch on the door. Thankfully, both Cuisinart and Kenmore have given some consideration as to how to make their ovens safe as well.

Although a more low-tech solution, Cuisinart ensures its oven doors are secure through the use of a hook. Kenmore, equally unwilling to compromise on safety, also has a safety catch. However, Kenmore has no automated option to pull out its oven racks. How well an oven can cook, toast, or bake, is obviously a key item to consider. With that in mind, it’s worth knowing how the three ovens fare against each other when it comes to these basic cooking functions.

In terms of toasting, all three combination oven ranges performed very similarly. However, the Kenmore does appear to toast a bit faster than the other two models. So if speed is a key deciding factor for you, the Kenmore may beat out the Breville.

Moving on to roasting, the Cuisinart seems to offer a better overall roast compared to Breville and Kenmore. On the other side of the spectrum, Kenmore takes a little longer to get roasting but still produces a good result. This means that Breville is in the middle of the spectrum for both models.

Another benchmark for any oven is how well it can cook  pizza — the ultimate in convenience and comfort food. Both Kenmore and Cuisinart models offer pizza stones within its price. However, you need to purchase a pizza stone separately for the Breville range. Alternatively, you can do away with pizza stones altogether and cook the pizzas directly in the combination oven.

How your pizza turns out will mainly depend on what settings you use on the Breville, Cuisinart, or Kenmore. But Kenmore appears to offer a more even cook. On the other hand, the quality of cook in Breville, could be slightly more even, but there’s not much difference between the two models.

The Pros and Cons of the Breville Smart Oven

As we saw in the comparison above, every combination oven has its unique features. This also means that every oven has areas where it can improve. We’ll take a look at some of the key benefits and drawbacks of the Breville smart oven below. Toaster Oven for your Cooking Needs and the best Brands Available

Kfgg500Ess: Great Products that Will Fit Into Almost Any Budget

DISCLAIMER
Disclaimer: Nice Oven may receive financial compensations from some of the links to products or services on this website.
Contact us: contact@niceoven.com
FOLLOW US
© Copyright 2019 NiceOven.com